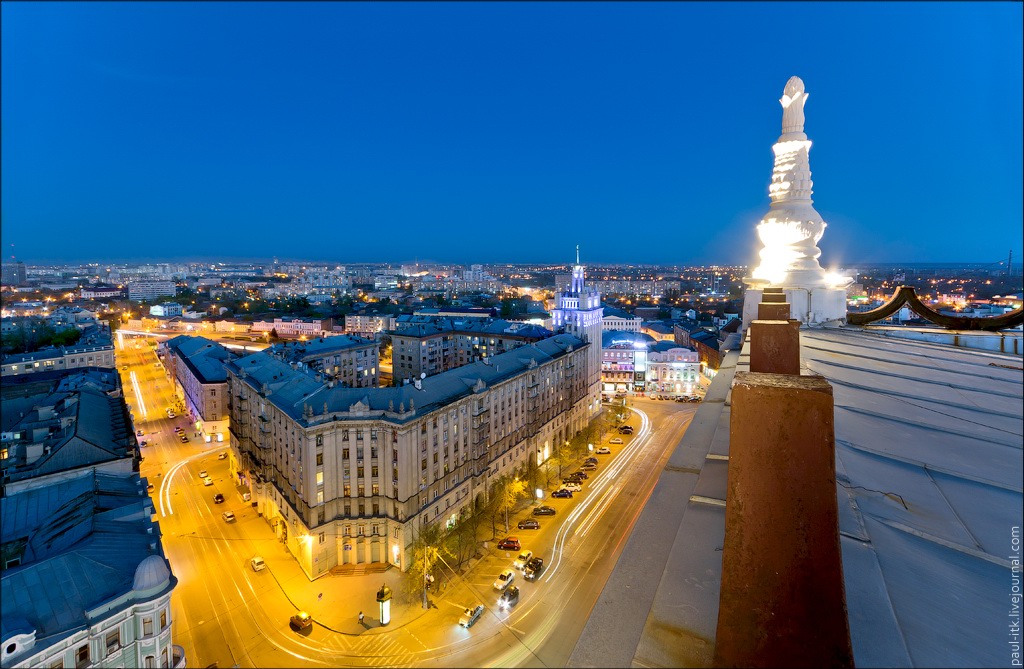 Kharkiv is the biggest city in the East of Ukraine. It is considered to be the capital of Slobidska Ukraine. We, the citizens of Kharkiv, are proud that it was the capital of Soviet Ukraine. That is why it is called “the first capital” among people.  Although Kharkiv is quite young (about 360 years old), it is one of the most interesting places to see in Ukraine. Today the city is changing and can impress even the most sophisticated travellers. So, in this article you will find 10 reasons why you should visit Kharkiv. And the first part is devoted to its historical and architectural sites.

Kharkiv is the first capital of Soviet USSR. That is why a part of the city was built according to this high status. Whatever your attitude to communism is, it undoubtedly gave Kharkiv unique sites without which we cannot imagine our city.

Let us take Gosprom – the building of  the government of Soviet Ukraine. It used to be called “the first Ukrainian skyscraper”. Its outlines have become one of the most recognisable symbols of the city. All in all,  not long ago there were lots of details reminding about the Soviet union: from monuments to stars at the facades of the buildings and the names of streets and underground stations. However, now many names of the streets have been changed, but if you take an excursion with an experienced guide, you may learn and see a lot of interesting things, which can stay unnoticed if you walk around the city alone.

The largest square of Ukraine. This is reason №2 to visit Kharkiv. 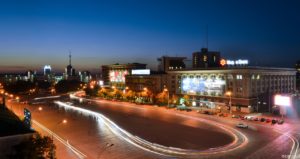 The square of Independence also takes its origins from the Soviet past. The citizens of Kharkiv like to say that it is the largest square in Europe. You can find not more than 10 squares consisting of 12 acres of paving stone and asphalt around the world. In Ukraine you will definitely not find any square similar to it. Witty Kharkovites have calculated that their square of Independence is five times bigger than the Red Square in Moscow.

The size of the square is not the only thing that deserves your attention. The buildings around it make an interesting ensemble as well.

In spite of its huge size, the central square is not the only one central square in Kharkiv. There is an old square called the Constitution square. In the middle of it there is a monument with a patriotic inscription “Glory to Ukraine.” And nearby there is the museum of history with a war machines open-air display. There you can not only see, but also touch the legendary tank T-34, which was built at the local factory. Next to it there is a unique British tank M-IV from the liberation competitions in 1917-1921, which was operated by the soldiers of Wrangel’s “white army”.

The next reason to visit Kharkiv is The triangle of cathedrals.

Nearby the square of Constitution there is a cosy park with a cascade fountain and beautiful rare trees. In their shade you can find the centre of  the conventional triangle of the most beautiful cathedrals in Kharkiv.

Pokrovskiy Catherdral built in the end of XII century is the oldest building of Kharkiv. Its “Cossack Baroque” style is an irrefutable proof of the Ukrainian foundation of the city.

Not far from it, on the hill, where there used to be a Kharkiv fortress, stands Uspenskiy cathedral which consists of the cathedral building of Baroque style (XVIII century) highlighted with different colours, and a classical style tall bell tower (XIX century).  Inside this philharmonic building there is  the hall of organ and  chamber music, where fabulous  concerts take place.

And finally, downhill on the other bank of the river Lopan, there is an extraordinary in size and appearance Blagoveshchenskiy Cathedral. It was built in the beginning of XX century and it is a mixture of different architectural styles: Balkan-Byzantine church building and the bell tower with typical gothic lines.

In the middle of this triangle stands the monument to G.S. Skovoroda as if watching these cathedrals. This monument is like a symbol of spiritual and intellectual traditions of the city, which formed the first university in the left-bank part of Ukraine and gained Kharkiv the name of the “student capital”.

The antique cinema of Eastern Europe.

Not all Kharkiv citizens know that the city is a good bait for cinema fans. And this is not a big number of 3-D cinemas which you can find here. This precious site is Bommer cinema, founded by Bommer brothers in 1908. It became the first stationary cinema in the Roman Empire. Being more than 100 years old, it has never changed its purpose and films were shown here even during the war. Bommer is also special because of its repertoire. There you can watch only serious festival, or arthouse films. When you buy a ticket, you will not find the number of your seat in it. You can choose the best place for you to watch a film yourself.  Today Bommer is generally accepted as the oldest working cinema theatre in Eastern Europe.

So if you are going to visit Kharkiv in nearest time remember all these places!