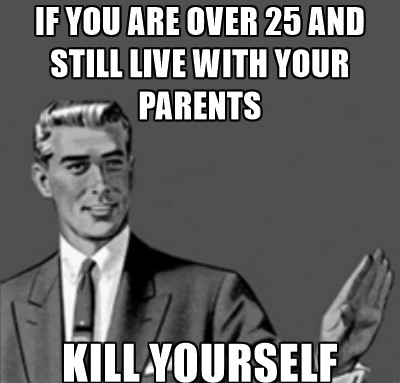 A 30 year old woman living with parents: love or run?

We are touching a very tricky question today – women from Ukraine who live with parents… is it normal?  It differs all around the world. In more patriarchal countries it is unacceptable and even dangerous for a woman to live alone before marriage. And it is vice versa in well-developed and democratic countries – for a woman living with parents up to 30 years can sometimes sound strange. Psychologists single out 3 stages of a life cycle of a family:

First stage – a single person starts living alone, on his own. He or she learns how to solve all questions concerning domestic problems. Yes, it can be difficult or expensive, but life is not always a bed of roses.

Second stage – two people start living together. If the first stage was skipped, some difficulties can happen; people do not know how much the life costs or encounter first domestic problems that can seem bigger than they are.

Third stage – family becomes bigger and child appears. And it is preferably that a person had a chance and desire to live alone for some time before it.

But what do we see in reality? How the things are in Ukraine? According to the Research&Branding Group survey, 57% of Ukrainians believe that children should live with parents until they get married and only 19% of them really live with parents, regardless of their marital status. The number is scary, huh? But the reasons why a single woman in her 30s can live with parents in Ukraine can be the following:

To sum it up, a 30 year old woman living with parents in Ukrainian space is a little wonder; especially it is much more common in villages and rural area. But with the influence of globalization and economic growth more and more women tend to be independent from their parents. It can depend on her economic situation, bonds with her parents and the traditions in her family.