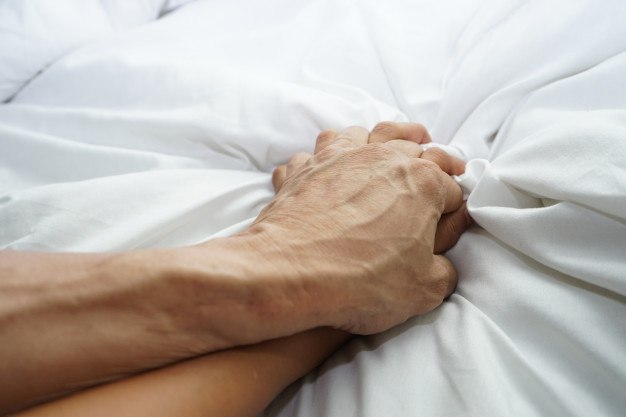 Ideal relationships are a combination of pure love and “dirty” sex rather than separating them, and making love a man and a woman do not only wish to continue the family line but also bring pleasure to each other. However, sometimes love making becomes so routine that the aspect of enjoyment fades away like a sweet perfume aroma leaving only memories behind. What could be done to prevent this from happening? You could read different books about sex with images, or just read our article and find out about the best positions for orgasm, which do not demand you to be an acrobat.

I hardly need to explain how to do it, still… The lady is on the back with her legs spread apart, the man is on top.

+ He controls the entire process, including the depth, and the frequency of frictions. She has an opportunity to relax, entrusting the main work to him. They get maximum proximity, eye contact and a generally comfortable position of the bodies.

Place a pillow under the lady’s pelvis. The angle of penetration will change and a little variety will appear.

It all starts with the classic missionary style, then the woman brings the legs together, pressing them tightly to her partner’s limbs. As a result, the base of the penis should be on the head of the clitoris. Making sliding movements up and down, the man additionally stimulates this zone. The lady can also move to increase the stimulation.

+ Suits women who find it difficult to reach orgasm. The problem is easily solved due to strong clitoral stimulation. The man does not get deep enough, but this is compensated by friction.

She spreads the legs and lifts them up. There are also many modifications: the limbs wrap around his torso, are on his shoulders or are pressed against the girl’s shoulders herself. An option chosen by lovers of strong fixation is to tie the partner’s limbs.

+ Deep penetration and stimulation of the G-spot.

Among the names of sex positions, this term is the most notable.

She gets down on all fours. He, kneeling, penetrates her from behind.

– It is one of the poses in sex with the lack of visual and extensive body contact. In general, it could hardly be called overly romantic. Another drawback: many women experience unpleasant sensations from strong shocks against the wall of the uterus.

Again, a pillow, which, among other things, will help a girl feel comfortable.

He is standing on the floor; she is lying on a bed or other surface.

+ A lady feels more comfortable; the opportunity to experiment and arrange a movement in sex places other than the bedroom.

– Standing up could be not among the best sexual positions for a guy.

He is on the floor at the edge of the bed, she is on all fours. After penetration, she rises and remains only on the knees. He supports her with his hand behind the torso.

+ This version of the doggy involves more body contact and also leaving room for glances and kisses. In general, it makes the traditional pose more intimate and gentler.

She is facedown; he is on top. It is something between doggy and missionary style.

He is on the back; she sits on top.

+ It is one of the best sexual positions for a lady with total control over a man, who finally can relax and enjoy the beautiful view.

She sits with the back to his face. He rises on his elbows or lies higher on the pillow. This allows the girl to bend over and lean against the bed.

+ In this variety, the lady has more fulcrums, and moves easily. Consequently, love-making becomes more dynamic.

Horsewoman on the back.

She lies back to him, resting the arms and feet on the bed.

– A girl has to be strong and agile.

Both are on their sides. He spreads his legs, and she wraps his upper leg with hers.

+ A girl’s clitoris is stimulated. The opportunity to try something unusual that does not require special gymnastic skills.

She is in the pose of scissors; he stands on his knees.

+ Deeper penetration and control for the guy, as well as the other benefits of doggy while maintaining eye contact.

The man is on his back and bends one knee. The girl sits down in a reverse horsewoman pose, wrapping around her partner’s bent leg.

+ A girl receives double stimulation; the guy – all the bonuses of “girl-on-top” pose.

Both lie on the side. She might either turn the back or face to him.

+ An intimate, comfortable, handy during pregnancy.

He sits on a bed or a chair. She sits on top.

+ Good for long love-making and reaching female orgasm, as the lady controls the process. Additional advantages are proximity, comfort, and the ability to change the pace and angle of penetration.

Both sit on the bed. The girl wraps the guy’s torso with the legs.

+ Deeper sensuality and relaxation, the chance to swing together, slowly reaching orgasm.

Lack of depth and dynamics.

Another version of missionary and doggy style. This time she is on the back, he is on his knees.

+ Both are able to control the speed and depth of penetration. A man can additionally caress his partner’s breasts and clitoris.

Our list does not contain standing poses as they are usually not very comfortable and require increased effort from a gentleman. But it simplifies the situation: he does not need to keep her elevated – it is enough to put her on a table or other surface his height permits.

+ Deep penetration as well as the diversity which having sex in different positions brings.

Last on the guide, but not least, as they say. Still very promising.

One of the partners is on the back, the other is on top, their face to genitals.

May not suit people of a different height or those who do not accept multitasking in love-making.

Both partners on the side. Comfortable for the one, who is on top in the classical version.

As you can see, the positions of sex mentioned in the article are neither too frank nor difficult. However, they might show you some new types of caresses as opportunities to enrich your sexual experience.