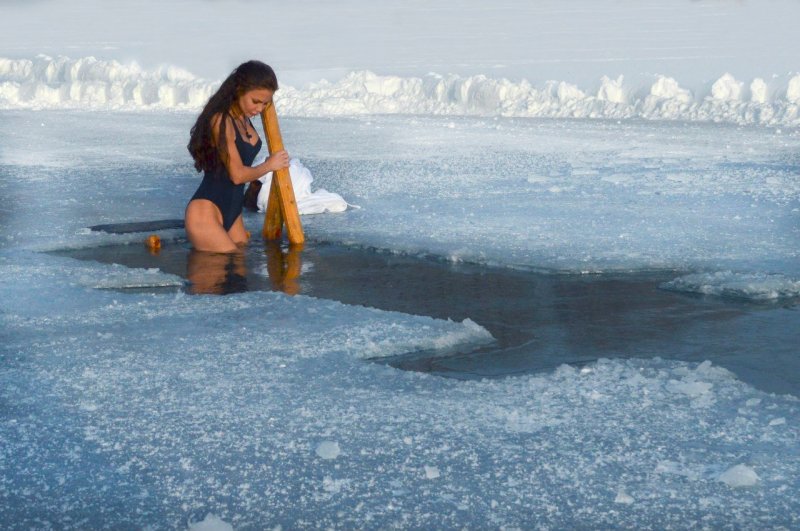 Epiphany in Ukraine: customs and traditions

On 19 January all Ukrainians celebrate Epiphany, which is one of major Christian holidays. Epiphany marks the end of Christmas festivities, which take place from 7 to 19 January. In spite of cold weather, the usual custom of swimming in the ice hole is observed every year and one can see a lot of people, willing to have a “cold swim” standing in a queue at the frozen ponds, lakes and rivers.

Of course, people celebrate Epiphany for a reason, which has its origin in distant past, when Johan the Baptist baptized Jesus Christ in the river Jordan. The Bible says that the Holy Spirit came in the face of a dove and declared that Jesus Christ was the son of the God.

It is not surprising that our ancestors used to baptize children on the Eve and the day of Epiphany as well as sanctify water. They believed that water sanctified on that day could heal soul and body. Therefore, everyone tried to keep it throughout the year, sprinkling it on clothes, drinking as a medicine, etc.

To celebrate Epiphany Ukrainians still follow a lot of customs and traditions, which have formed throughout the years. One of the most popular and loved traditions is to prepare the festive kutia (similar to the Christmas dish), which is made of rice or wheat, mixed with raisins, poppy seeds, honey, dried apricots and prunes. All the family sit around the table, on which there is kutia, uzvar, vareniki, pancakes, buns and bread rolls, fish dishes and different cereals. It is traditional to start the dinner after the first star appears in the sky. This is the time when people finish the strict fasting, which has to be kept till Epiphany.

Of course, the main tradition, which is still kept by people, who celebrate Epiphany, is sanctifying water. The procedure is as follows: the priest puts a cross into a specially-made ice hole, which is called “Jordan”, and says the prayer. It is believed that when he finishes the water becomes saint and miraculous, like the water in the Jordan River into which Jesus went. Moreover, it is believed that water in every spring on Earth can heal any disease.

People, who celebrate Epiphany in a traditional way, cannot help swimming in an ice-hole on that day. This procedure is especially popular with those, who have some diseases and wish the Epiphany water to heal them. Moreover, those who went caroling during the New Year and Christmas festivities and put on different costumes also must dive into cold sacred water and wash their sins away. A lot of people, who want to sanctify water, can be seen in the churchyards at the night church service. However, if you do not have a chance to go there, do not be worried. You can either wake up till the sunrise and take a shower, or go to any water reservoir and take water there. You will be blessed anyway.

Finally, there are also Epiphany superstitions, which people, who celebrate Epiphany, must know. For example, if the weather is clear and frosty on that day, the summer will be dry; but if the weather is snowy and cloudy, there will be rich harvest. It is also believed that if full moon falls on the night of Epiphany, the weather in January will be the same as during the following three days after the holiday. Therefore, if the sky is clear and cloudless, the weather will be frosty and clear till the end of the month. In case it rains, we are to expect cloudy and rainy weather till the end of January.

One Response to “Epiphany in Ukraine: customs and traditions”