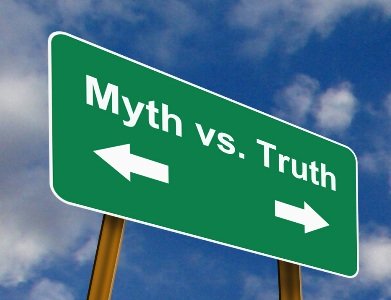 Seven myths about sex and women

Sex plays an important part in our life. Not the leading one for someone, maybe, but still, it is something that helps us, people, continue to survive as a species. That is why, talking about sex is quite frequent. And that is why there are a lot of myths about sex. In this article we have decided to discuss the myths about sex and women. We have found the most widespread ones and tried to explain the truth about each of them. So, we hope, that you will find something useful for yourself.

Sex myth #1. Finding the G-spot is the most important.

Truth. More than 60 years ago a German gynaecologist made a supposition that in every woman’s body there is a nerve bundle stimulating which will definitely lead to numerous orgasms. The biggest difficulty is to find that spot. So since that time men all over the world have been trying to find it. However scientists of the Royal London college held a research not so long ago. They invited 900 couples of twins since they have the same set of genes the G-spot was supposed to be found in both sisters. Having conducted several experiments they have come to a decision that such correspondence was not found. Hence, so far there are no proofs that G-spot really exists. Still, there are a lot of erogenous zones that you can look for if you want to satisfy your woman.

Sex myth #2. Size does not matter.

Truth. It depends on a woman. Although psychologists as well as women questioned claim that physical aspect of sex is less important than emotional. If a woman is in love, being sexually close equals to being spiritually close centimetres do not play an important role.

Sex myth #3.  A woman must have feelings for her partner to get delight from sex.

Truth. Of course, a lot of women say that romance and being emotionally close to the partner is very important. But, believe it or not, women want sex from time to time. It has to be plain sex with an attractive man. Many of us get seduced by temptations not connected with love and do not feel sorry about that.

Sex myth #4. A woman does not want one-night sex.

Truth. Our society thinks that women want to have only long-term relationship. However, not every woman wants to build relationship with a man she had sex with. Many can get satisfaction without a wish to have something more from the date.

Sex myth #5. It is difficult to satisfy a woman and make her feel an orgasm.

Truth. Actually, that is not a general truth. The representatives of the fair sex do need time and partner’s attention to get satisfaction. However if a woman gets on well with her body and can relax in bed, it will take her very short time to reach the culmination.

Historically a man has always been the initiator of sex. That is why this myth has appeared. However, the fact that women haven’t initiated sex for centuries, does not mean that they need it less than men. There are situations when we want sex, but we have to wait till someone offers it.

Sex myth #7. If a woman has fantasies about other men, she does not love her partner.

You must know that women have fantasies about their ex-partners, popular actors and colleagues. Sexologists even think that fantasies help them to be faithful to their spouses. This is an inseparable part of women’s sexuality, which definitely cannot be considered a sign of problems in relationship.

As you can see, most of the myths mentioned differ from the truth. That is why, if you hear something, do not hurry to believe it at once. Take a chance to become an explorer and find out yourself if it is really truth or not.